Matthew 22 verse 34-40. But when the Pharisees heard that He had silenced the Sadducees, they gathered together. Then one of them, a lawyer, asked Him a question, testing Him, and saying, Teacher, which is the great commandment in the law? Jesus said to him, you shall love the Lord your God with all your heart, with all your soul, and with all your mind. This is the first and great commandment. And the second is like it: You shall love your neighbor as yourself. On these two commandments hang all the Law and the Prophets.

In trying to understand Jesus’ response to this question, we must first remember that Jesus knew and understood the Law and kept them, and that is why He was without sin. It is no surprise that when He was asked about the greatest command, He was able to respond with wisdom.

At the time this question was asked, the Israelites were governed by 613 laws. One of the Pharisees asked Jesus, which one of the Law was the greatest? Or which was the most important one of the 613? Jesus’ response was simple. Love. Love God. Then He added a second, love your neighbor. He simply answered the question, which one? And by the way, Deuteronomy 6:5 love God, & Leviticus 19:18 Love your neighbor, proves that Jesus was not giving any new commands, but highlighting the strongest of what the father had already given.

Jesus, knowing the hearts of men, and also perceiving their intentions, added verse 40 for the sake of clarity, lest they accuse Him of replacing them by His response. In verse 40, He made it clear that the Law was still active by saying, On these two commandments hang all the Law and the Prophets. At no time did He say that the others were not important, or that the love commands were new and the only ones that we were to keep. He was just making a point, that if we commit ourselves to love, there will be no law-breaking, judges and courts would be inactive, judgment and retribution would be unheard of, and the curse of the Law would not be activated. We would be at peace with each other.

Remember, genuine love comes by way of relationship and intimacy. It transforms the hearts of the people, and causes them to think and behave differently; You will know it by their actions. Therefore, if you love God and your neighbor, you would have obeyed the laws and would not have failed the Father.

Stop for a minute and look at the picture below. I am sure you could identify the ceiling and the light fixture which is the wooden piece of log with lights wrapped around it. The ceiling is strong and supports the light fixture hanging from it, keeping it stable enough for it to be used for the purpose it was designed for. It is the same with love. Love is like the ceiling. It supports the Laws and Prophets, making it easy for them to be used for the purpose they were designed for. 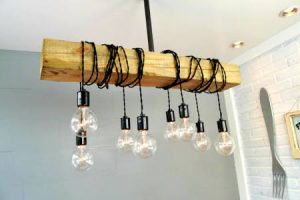 Remember, all the Law and Prophets still suspend or hang on the two love commands.

“In this was manifested the love of God toward us, because that God sent his only begotten Son into the world, that we might live through him.” — 1 John 4:9