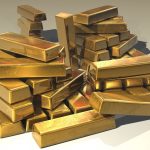 Gold has become so common to us in the world, we value it, yet it seems ordinary.  But God’s instructions reveal to us how He feels about gold. It was used in every aspect of the construction of the Tabernacle, Temple, the holy garments for the priestly office, and in the New Jerusalem. Even though there are many more fine and beautiful minerals, God chose Gold more often than the others, probably because of its stability and strength.
Gold has always been associated with wealth and power, and in scripture, it was vitally important in the things that God wanted to be made.
Exodus 28 tells us,

Seeing beyond the natural is really taking a glimpse of God’s view concerning anything. It is where secrets and mysteries are revealed, and where we gain His perspective on things, by what He has done. What we see is the use of gold is the same, because the characteristic, consistency, value, and dependability has not changed.
Internet research about gold. (Hopefully, the research information is correct)

Remember, God used gold in the making of things that are intricately connected to Him, both in the Old Testament and in His Holy City in Eternity. That speaks volumes.
There are spiritual significances in the use of numbers, colors, and minerals throughout the bible. Gold is an important asset, and understanding its value must come from God, and not from the world.

“In this was manifested the love of God toward us, because that God sent his only begotten Son into the world, that we might live through him.” — 1 John 4:9